Did someone shoot you in the face with a gun full of green water today? Or startle you with a pink powder shower?

You should be pleased! It’s just time for Holi – the festival of colours, new beginnings, the repayment of debts and the ending of conflicts.

This Hindu festival is celebrated at the end of winter – the day after the full moon in March each year.

This year the full moon falls on March 9th, and is a Super Worm Moon. Time now for the worms to start emerging from the cold ground as it defrosts. Hello worms! This moon will be influential in helping you finish old business and complete long-abandoned projects. 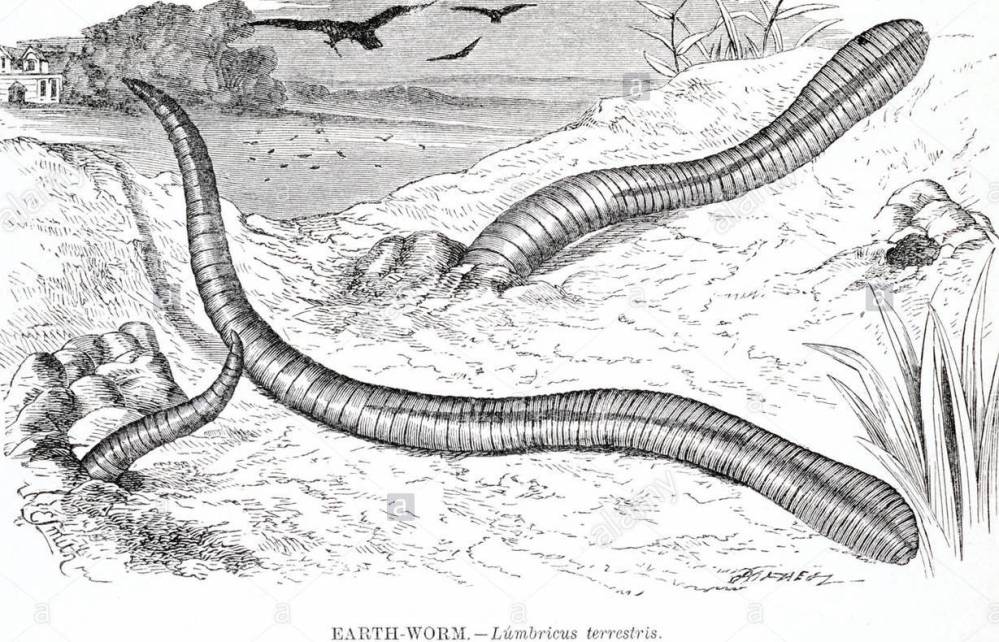 On Monday 9th of March there are pre-festival celebrations of bonfires for the Holika Dahan ritual, where effigies of the demoness Holika are publicly burnt to symbolise the triumph of good over evil.

In the Very Early Times, there was an ambitious king called Hiranyakashipu (his name means “clothed in gold”) who wished to be immortal and gain magical powers.

He prayed and sacrificed to the triple-headed cosmic egg god Brahma until he was granted 5 wishes.

Because the Gods were not allowed to grant mortals immortality, Brahma instead granted him 5 special powers: he could be killed by neither a human or an animal, neither indoors or outdoors, neither at day or at night, neither by projectile weapons nor by handheld weapons, and neither in land nor in water.

Considering himself to be now essentially immortal, Hiranyakashipu insisted that he be worshiped as a god.

His devout son Prahlad refused to do so, and continued worshipping the four-armed blue-skinned Lord Vishnu as he always had.

This enraged his father, who decided to destroy the boy. He called upon his sister the demon Holika for help, as she had a magic fireproof cloak.

Hiranyakashipu asked her to sit on a bonfire with the child on her lap, protecting herself with her magic cloak.

As the flames rose up around them, a wind sent by Vishnu whirled the cloak from her body and wrapped it around the child.

She was burnt to ashes and the child survived, to be revenged by his protector Vishnu.

Vishnu appeared in the form of Narasimha (who is half lion and half human) at dusk, captured Hiranyakashipu at a doorstep, and placed him on his lap to tear him open with his claws, thereby circumventing the 5 special powers granted by Brahma. 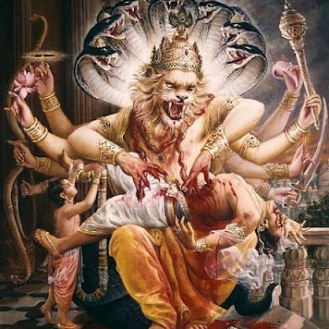 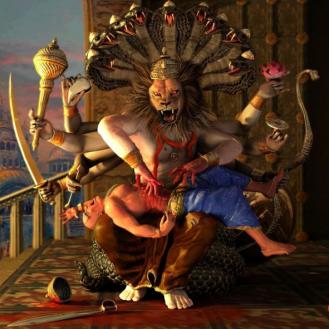 So much for Hiranyakashipu! And still on the night of the full moon in March, Holika is burned in effigy.

If you have an toxic person or enemy who you wish to remove from your life, this is a good opportunity to turn the moontide in your favour by destroying their image with fire in Holika’s place in the bonfire or as described in my post Vanquish A Love Rival Via Voodoo.

You could also burn a sheet of black paper (you don’t need to join a bonfire party for this, you could just set fire to the paper in a safe place) while focusing on any inner darkness you have being consumed by the flames, and chanting this spell for cleansing:

I release the darkness from myself

I wish it well and send it away forever

Any beings, energies or thoughts which no longer help me

I send away now with thanks

Anything dark shall be transmuted into light

As the Worm Moon enhances new beginnings and self-cleansing, this would be an auspicious time to carry out this simple ritual.

On the following day – Tuesday 10th March this year – the festival of Holi begins, lasting into the night.

People will smear bright pastes on each other, throw coloured powders and squirt coloured water with water pistols.

This occurs in the open streets and in parks, so do be prepared if you’re out and about. Playing instruments, dancing and singing in the streets is encouraged.

Even if you only play the opening bars to “Cars” by Gary Numan over and over again on a pocket Casio, this will still be technically in the spirit of the season.

A popular festival drink is Thandai, a milky spiced blend which is frequently zhuzhed up by adding bhang (powdered cannabis leaves and buds) to create Bhang Ki Thandai – the milk and ground nuts used for Thandai solubize the fat-soluble cannabinoids – in other words, the ingredients blend together rather than separating.

The pepper and fennel seeds in the drink theoretically keep the cannabis taste from dominating the flavour profile.

Bhang Ki Thandai has been used in ceremonies for centuries to achieve spiritual ecstasy and transcendental states, so it seems like something you should definitely try at least once.

The lazy way to make Thandai at home is to buy Thandai syrup online and blend it with milk, yoghurt and honey.

If you want to attempt Bhang Ki Thandai, I don’t have a solid recommendation for bhang shopping, but you could keep your eyes peeled on the street for any shops advertising “holi bhang” for the festival.

I’ve cravenly opted for the colour celebration rather than the spiritual ecstasy story strand for the cocktail I created for the Holi holiday. 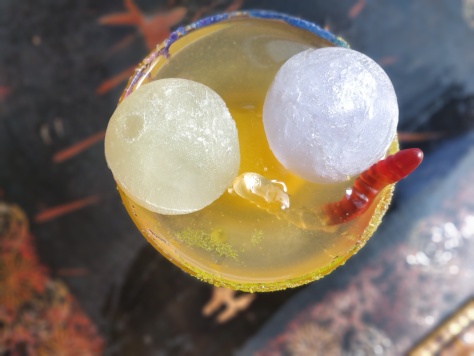 You need to create a fruity coloured alcoholic ice ball, and you could use any combination of vodka and the mixer of your choice to do this. You are aiming for 3 balls for each glass.

Use 2/3 mixer to 1/3 vodka. Any higher alcohol content than this and they won’t freeze, therefore if you were using 12 fluid oz of liquid to fill your moulds, use 8oz juice/mixer and 4oz vodka.

Because they contain alcohol, the balls won’t be rock solid frozen, and this is good. You want them to dissolve fairly easily as you drink. 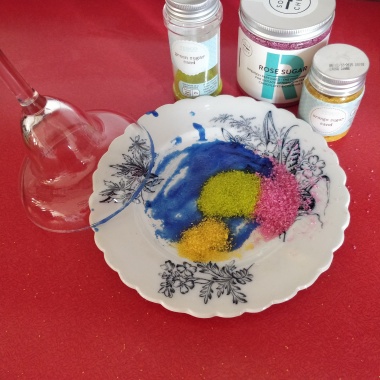 Place granulated white sugar into a bowl, add a few drops of food colour, and mix well with a fork.

Add a little colour at first, so you can see how deep the colour looks with the sugar, then add a few more drops as you go if you need it.

When the sugar is the colour you desire, spread it on a plate to dry out for at least 1 hour.

Occasionally spread it out with your fork to break up any lumps and make sure the sugar is drying out evenly.

To rim a glass with sugar

You can wipe a slice of lime or lemon around the glasses edge before dunking it in the plated sugar, or if you would like a longer-lasting effect, use beaten egg white and after dunking, set the glasses aside to dry and harden.

If you opt for egg white, you can easily refill and top up the glasses without diminishing the visual. 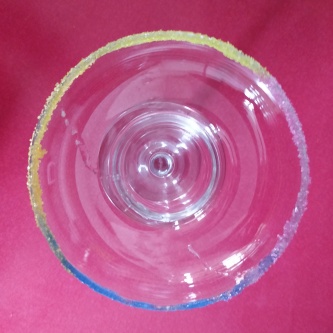 When you are ready with your sugar-rimmed glass, place 3 balls of different colours into the glass, and submerge with pink rosé wine. I garnished mine with a gummi wurm as an little offering to the Worm Moon.

I made one ball with lime cordial/fresh lime juice, one with orange juice and one with violet lemonade.

With ice balls frozen and ready to go, these are very quick and easy to assemble, which suits a party.

Drink them with friends, strangers, favourites and foes, and clink glasses frequently to frighten away hovering evil spirits and welcome your clean, colourful new slate!