Sweden is an unusual country. What happens there is this.

Most of the year they exist in a black dark. A few months of the year the sun is out all the time, even at midnight. At this time all Swedes shut up shop and go to stay in little red box houses on the archipelago (areas of the Swedish mainland which crumble into tiny islands) to do a thing called #archipelagolife which means messing about in boats and dancing around maypoles and it’s also called Midsommar.

There is an excellent recent documentary about this, if you can make the time to watch it.

Before Old Man Winter puts his black hand back over them, they mostly celebrate with crayfish parties AKA Kräftskiva

In theory these are about eating crayfish but in fact it’s about getting drunk and wearing silly hats. Crayfish parties are especially fun because they make no real sense. When they started up in the Old Days, they were a fun way of mopping up the excess of crayfish which swarmed the lakes and rivers in summer at kräftpremiär time AKA crayfish season.

After the Great Crayfish Plague of 1907, the vicious little crustaceans almost died out, but the Swedes carried doggedly on with their parties, simply importing pre-cooked crayfish from China. The thing is very simple: you decorate a table with crayfish-themed party goods, also with paper lanterns depicting The Man In The Moon, who is a mysterious character, associated with lunar rabbits.

He is depicted at these events because he is known to look after madmen and drunkards in the night. There are plenty of these at any good crayfish party, usually wearing the cone-shaped party hats which originated as a form of mockery of the moneyed upper classes who in the old Old Days were the people usually eating fresh seafood in Sweden.

The crayfish must be cooked in a traditional mixture of brine and dill, then decorated with dill “crowns” or krondill which are the flowers of dill herb. When I threw my party last weekend it was in London, which made it tricky. 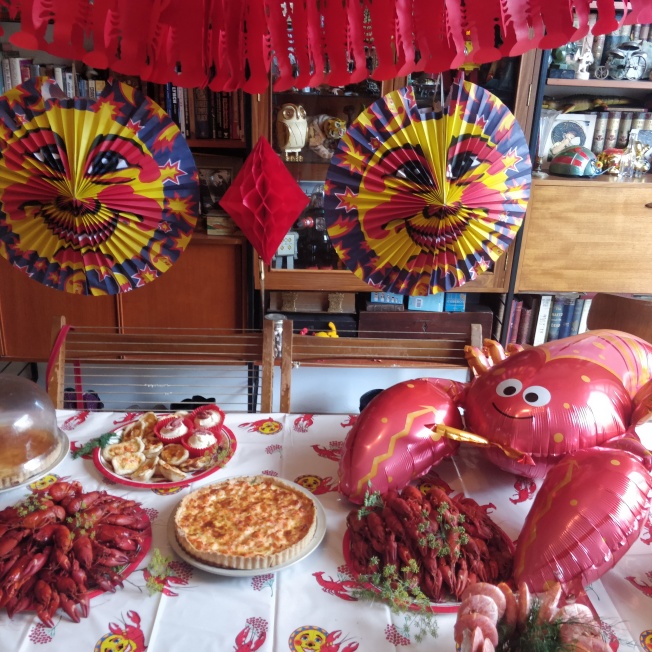 Västerbotten cheese and various kracklebreds and knäckebröds were available from Waitrose, so I was able to easily source these traditional components of the meal, but other ingredients took a bit more effort.

No pre-cooked crayfish available here (IKEA discontinued them apparently), so I had to go deep and take an early morning trip to Billingsgate Fish Market to source live crayfish.

The thing is this: Some shellfish can be bought dead just as you would buy fish or meat, then cooked at leisure. This is fine for shrimps and prawns.

Others must be bought alive and cooked quickly in order to avoid dangerous bacteria which develop after death. There are various schools of thought about this, but as food poisoning is generally considered bad, general practice is still to buy lobsters, crabs and crayfish alive.

I had not previously considered this, so was surprised to find the crayfish section at the market filled with lively, vicious grey little sort of demonic insects, is the best description of them I think.

I carried a black bin liner half full of these new friends home, where I was obliged to place them in a sink full of cold water to purge themselves in order that I might murder them later by dropping them into boiling water.

I baked a traditional Västerbottensost cheese pie with my Waitrose cheese, and made a dessert of cupcakes topped with tiny red chocolate crayfish.

Some big shrimps for people in the mood for seafood but exhausted with prising open crayfish, a crayfish tail quiche as a kind of gateway crayfish food to lure people in, extra cheeses and a big loaf of sourdough bread from the local bakery and my party ducks were in a row.

The key is to keep it simple, you’re not supposed to be creating a smorgasbord.

I would have been stuck for crown dill, which is not really available in the UK, but for that my friend H happened to mention recently that she had wild dill growing in her front garden as a weed, and had left it as the flowers looked pretty.

Not any more they don’t! as I rapidly harvested them for party use.

The paper supplies were no problem, as they seem to be available exclusively in Swedish supermarkets, and I had just got back from a tour of Scandinavia.

It was the work of moments to squeeze cardboard hats, plastic tablecloth, 2 x Man In The Moon paper lanterns, paper plates, oversized crayfish foil balloon, plastic shot glasses, red honeycomb centre accent thingy and a crayfish garland into my single carry-on bag to bring back with me.

If I hadn’t had that option I would have had to make a journey to IKEA to raid their paper goods section, despite the obvious parallels between IKEA visits and increased mental instability.

As for  the traditional drinks,  these are beer, aquavit or schnapps, and vodka. A slight swerve to the right country-wise made it easy to include Norwegian beer as that’s easily-available Carlsberg. I’m not a beer person, so I’ll assume this is fine.

As it happened I had half a bottle of Aquavit in the cupboard, as it’s a popular gift for people to bring back from Nordic countries. I decided to infuse some vodka for the table and make an dill-crown infused vodka cocktail to get things started with a “Skål!”

Cook the crayfish and shrimps for 3-5 minutes depending on their size in boiling water with a cup of salt, fresh dill leaves and crown dill. The cooking process transforms the savage inky nightmare fuel into jolly little scarlet mini-lobsters.

My nephew Tom helped me add spice and warmth to the mix of mayonnaise and ketchup by adding infused saffron strands and paprika.

If you can’t find Swedish cheese, you could use a mixture of mature cheddar and Parmesan for the full, sharp flavour required.

I bought ready-shelled crayfish tails from Lidl for this, after my traumatic live crayfish experience. 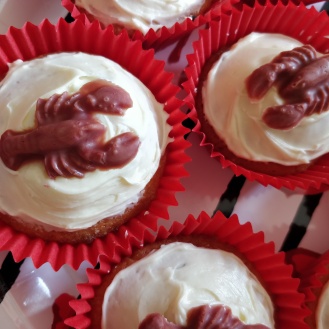 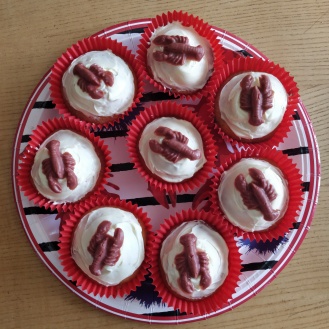 It’s very easy to infuse/flavour vodka at home, simply drop your fresh chopped strawberries, mint leaves or crown dill into the bottle, leave it for a week, then strain it and put the bottle in the freezer, to chill until gloppy. Serve the bottles or jugs in a bowl of ice.

Lisa Parker of the New York Cocktail Club came over to help me put the Silly Dilly together, and while it’s herbal and full of dry aniseed notes from the crown dill, the citrus and sweet liqueurs balance that out nicely. This is a very refreshing hot weather cocktail.

Combine ingredients in a shaker with ice to agitate well, and strain to serve over fresh ice. If you were pre-batching these for convenience, try just pre-preparing the alcohol mixture then shake with the lime juice before pouring.

Bruise the mint by gently rubbing it with your fingers before adding a spring to the drink. 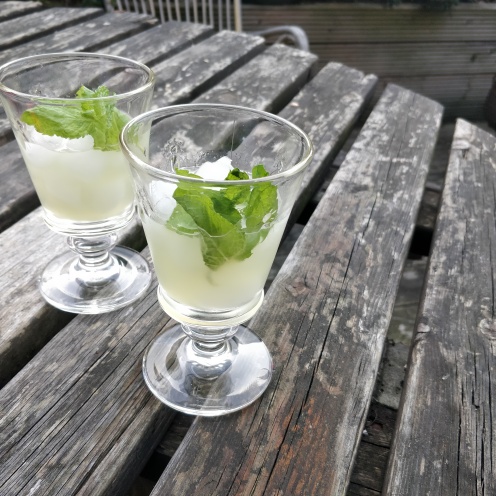 After a few shots of Aquavit and vodka  the despised party hats begin to look quite stylish, isn’t a change of perspective fun?

Singing drinking songs is encouraged at these parties, and this also begins to come naturally after you have introduced some alcohol into your system. At this party we invented a hot new crayfish dance which included a sideways scuttle and claw hand snaps. 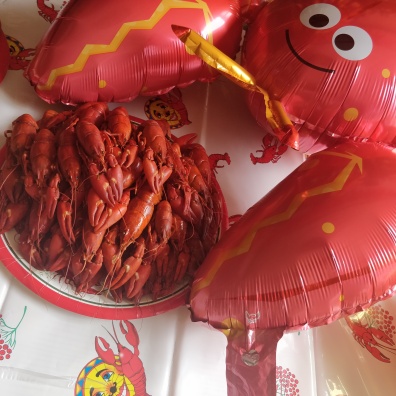 You may have noticed that this menu  is dominated by crown dill, which gained its iconic status in Swedish cuisine due to its esoteric properties as much as its strong, sweet herbal flavour.

Swedish witches have traditionally used this herb for infusions to encourage good fortune and protection. When they made their annual pilgrimage to Blåkulla (the Blue Hill), crown dill was the chief ingredient in their potions for safe journeys. 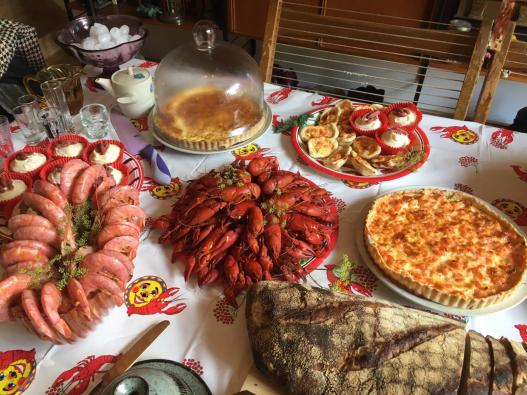 If you are starting on a journey, even to a new house, job or friendship – crown dill is a key ingredient to finding a safe path and avoiding pitfalls. 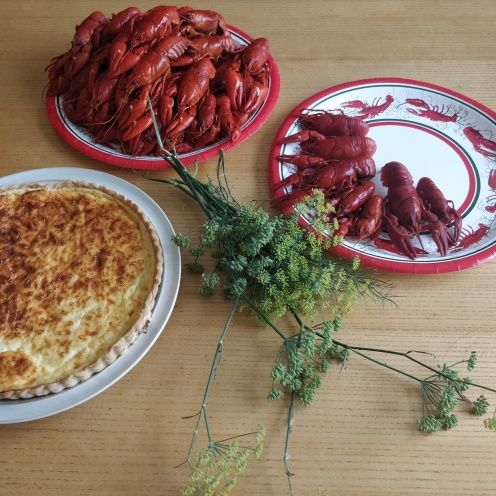 Grow it in a window box or in a pot by the door – it’s a pretty, aromatic herb with feathery leaves and yellow flowers and will provide protection for your home.