It is a truth universally acknowledged that the natural birth of fondue was long ago in remote Alpine huts when, snow-bound and with only stale bread crusts and cheese rinds left to eat, some genius melted the cheese, added a dash of home-made kirsch to stave off the cold, and created one of the most delicious meals in the world.

The Great Fondue Conspiracy would have it otherwise.

Certain side-eying through the looking glass types claim that the Schweizerische Kaseunion (AKA the Swiss Cheese Union) both cynically created this urban cheese myth and campaigned to promote fondue purely to establish the dominance of market leaders Gruyere and Emmental at the expense of individual cheesemakers small batch alternatives, to wipe out the competition. 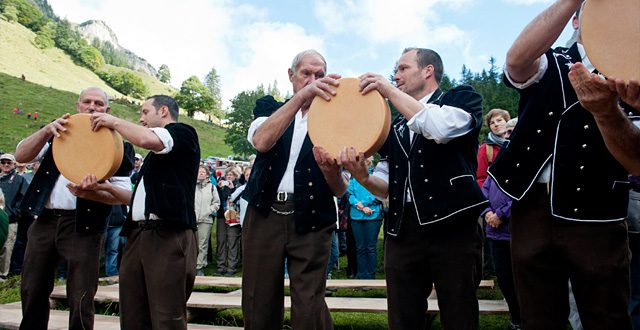 It would seem that cheesemaking is a more cut-throat world than you may have previously imagined. Next we’ll be hearing that the baby goats skipping through the edelweiss only wore tinkling bells to alert the local cheese barons that their latest delivery of hookers and blow had arrived.

Certainly it is true that the Notorious SK heavily promoted fondue as the Swiss national dish from the 1930’s to the 1960’s and were responsible for the fondue craze which as it peaked meant that you were barely fit to be seen in society if you weren’t lounging by a tabletop pot in a polo neck eating a dripping bread cube on a stick. 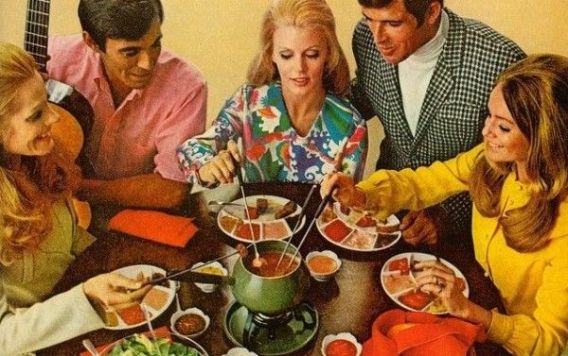 The Tyrolean Alps village at the 1904 Louisiana Purchase Exposition in Chicago first introduced fondue to the American public before the Alpine Hut at the Swiss Pavilion at the 1939 New York World’s Fair held fondue-making demonstrations, serving thousands of gallons of liquid cheese to the novelty-hungry crowds. 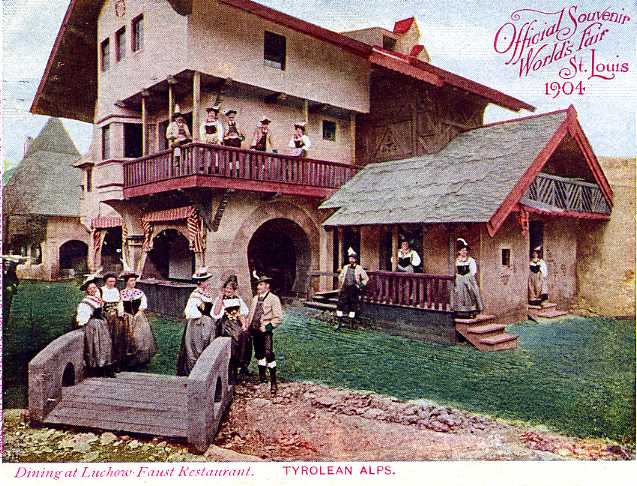 Where the Big Cheese conspiracy theory falls apart is that the practice of making fondue from old stale food makes perfect logical sense, plus also you can make fondue out of almost any cheese anyway.

True, Gruyere and Emmental are popular as the main ingredient, but as anyone who has read past the 3rd page of their fondue cookbook can tell you, it can be any number of blends of cheese and alcohol because essentially you cannot go wrong by combining these two things and dipping bread into the mixture.

The humblest rough sleeper can create Street Fondue by boiling a few rinds up in a can of beer over a dump fire, and it will probably taste decent. 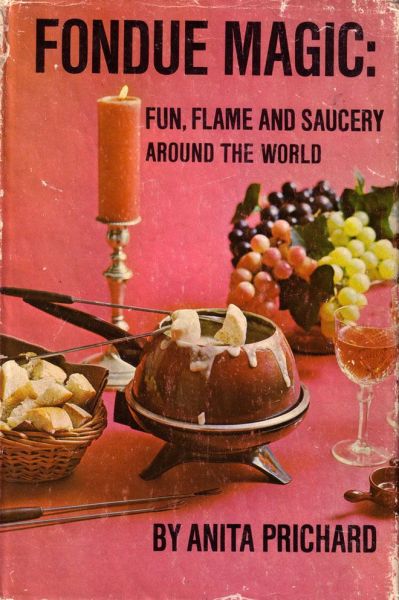 Fondue has enjoyed a recent resurgence, with cool kids digging out half-forgotten pots from their parents kitchen cupboards then melting and dipping just like the old folks done did back in the day, and then cheese cocktails have become a thing, also.

In London, the Duck & Waffle have a Chocolate & Blue Cheese Martini, The Whistling Shop makes their own “Goatka” from Ketal One vodka and goats cheese, and I can personally vouch for the Sweet Stilton at the tragically now defunct Natural Philosopher cocktail bar on Hackney Road.

The cheese was introduced to that one by making a simple syrup with blue cheese, which, trust me, you shouldn’t knock until you’ve tried.

Used since early times for ritual purpose, cheese is one of the most powerful magical foods available to us. Whether a rich Cheddar, a mouldy Stilton or a goat milk paste, it can be used to connect us with our past, present and future.

Because of the nature of its creation, cheese works as a link to alternate states and aids prophecy. 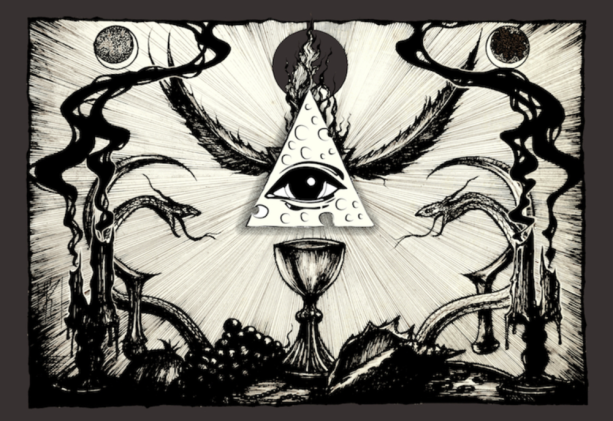 If you keep all your eyes open, you can discover secret societies such as The Hallouminati Club, who experiment with the mystical properties of cheese combinations in Sympathetic surroundings. You can follow them on Instagram at @raw_cheese_power.

After a tasting at The Last Tuesday Society this week, I was able to sit down with The Dark Knight of Cholesterol for a few questions regarding cheese saucery….

One of the main magical uses of cheese is to help us pass into trances for the purpose of spirit traveling and astral projection. What cheese would you recommend for entering a focused trance?

You’d be drawing on centuries of tradition.

The scent of cheese in the air can, when mingled with smoke from the appropriate burning herbs and the steam rising from mulled wine or the potion of the night enhance the magical atmosphere of a room and increase any magical activity being carried out significantly.
What cheese to you has the most intoxicating smell? and what cheese would you recommend for working magic?

Decent, ripe Brie or Camembert is distinctively nappy like, which could make a good contraceptive spell, or a fertility spell, depending on the effect it has on that person.
Cheese is very visual and tactile too, so when working with scents to appease spirits or elements or draw down planetary forces, a nice stinky, reddish washed rind cheese with some blood red wine splashed about during the planetary hour of Mars could make a strong, defensive stance against an aggressor or intruder.

It is known that wandering spirits are attracted by the scent of cheese. Working around cheese as you do, what has been your most otherworldly experience?

Treading up in the mountains of Val Maira, smelling the wild lavender that the goats were eating and then a lightening flash moment of realizing that was the character of the cheese I was up there buying. More third eye opening than spirit based, but not an everyday moment.

Any place or object can potentially be haunted, whether for good or evil purpose.
Have you ever experienced a haunted cheese?

No, but I’ve watched a glass of red wine crack itself perfectly in half and then fall in two without a sound. Pretty mad. I think it was a relative contacting me.

If you eat haunted cheese, do you think the entity haunting it is destroyed, or does it rather become a part of the cheese-eater?

Definitely absorbed. I’d recommend a laxative potion in that case.

Cheese can be used to open our senses to wider perception of the unseen entities which populate the world around us. In combination with other intoxicants, such as beer or wine, cheese can help blend the natural world and the spiritual world, opening our minds and eyes to alternate planes of existence.
What combination of cheeses and drinks would you recommend for the maximum cabbalistic effect, for instance, during a seance?

Any good tasting or pairing should have very few rules. There are some which just don’t work (blue sheep and cashew once made me heave) but otherwise it should be down to the person and the vibe. Anyone who says x with y is the accepted zzz is either a snob or a nob or both.
I prefer to take people on a journey from mild to rich to subtle and strong. Plus you don’t want to cheesegasm too quickly do you?

At this weeks event, we experienced (amongst other things) Crémant wine drizzled over washed-rind cheeses and Chartreuse liqueur dripped over a vache–chèvre mix layered with Chartreuse jelly, and all in the most delightful company….. 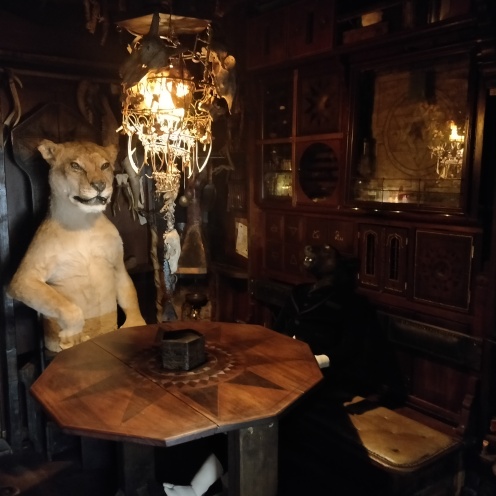 To make your own cheese cocktails, you can use a method called fat-washing to infuse alcohol.

By melting the cheese, mixing it with the chosen spirit, freezing the mixture, skimming the fat and sieving out the cheese residue, you are left with a clear cheesy spirit. I used 3 oz Stilton in a pint of brandy, and repeated the process three times. You use a similar method to infuse alcohol with bacon.

Shake the brandy, liqueur and juice together with ice in a chilled shaker. It’s really important you get this ice-cold, as it’s both savoury, sweet and rich.

Strain into a chilled glass and dot with bitters. This is the ideal drink for a fortune telling session, as cheese is amenable to this and leaves you open to prophetic dreams afterwards.

Garnish with a mild sweet cheese like Mayfield cheese from Sussex.

If this seems too scary (or too much trouble) you can add cheese as a garnish. Staying with the retro fondue theme, you could try a cheese and pineapple cocktail.

3 shots pineapple juice (fresh is better, but it wouldn’t be a disaster if you used the juice from the can)

Take the pineapple chunks and muddle in a cocktail shaker along with the mint leaf. Add the juice and muddle more. Add the Scotch and shake with ice, then strain into an iced glass. Garnish with a pineapple cube and cheese cubes on a stick. Use a firm, strong cheese like a mature Cheddar or Red Leicester.

If you want to dip your toe into fondue so to speak, you could try the St. Moritz brasserie– London’s oldest Swiss restaurant, reeking of ancient cheeses and located on Wardour Street, or the Raclette brothers new Brixton restaurant Alpes. That one’s housed in an old shipping container and very on trend.

My current favourite is The White Haus in Farrendon – an Alpine themed bar where you can eat fondue in a vintage cable car for a more immersive aprez-ski type dining experience.

The closure in 2008 of the restaurant at the Swiss Centre in Leicester Square was a sad day for me.

This is where I had my first experience of fondue and Swiss meatballs, plus it really opened my eyes to the possibilities of Alpine décor, leaving me with a lifelong weakness for cowbells and gingham. The only sign left that it was ever there is the 23 bell carillon Swiss clock still dominating the site. 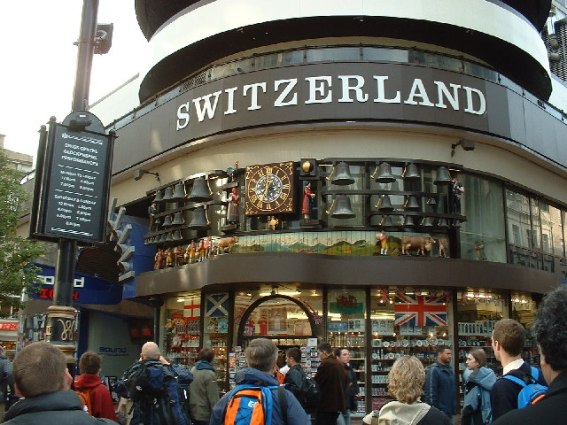 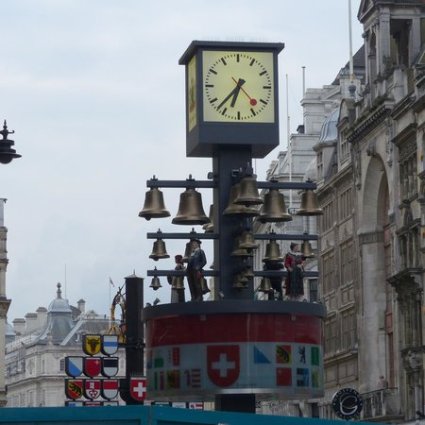 There’s an M&M World in the place of the Swiss Centre now – the sinister anthropomorphized chocolate Things which populate the façade mocking the simple cheese-seeker with their eerie grins and clutching, gloved hands. 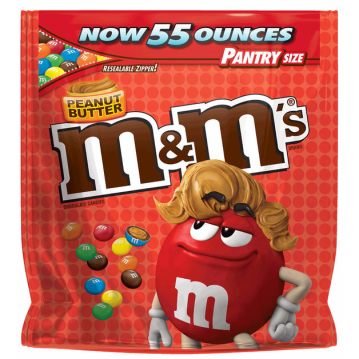 If you drop your bread in the fondue, you must take a drink or kiss your neighbour. That’s it, those are the Classic Fondue Rules.

Some people have tried to extend them to removing clothes each time, singing, telling secrets or even running through the snow naked, but those people are trying too hard. Drinking and kissing is enough.

Cheese + alcohol + kissing = happiness. You don’t need an aid to fortune-telling to know that, so in this situation the esoteric qualities of this ingredient are merely a bonus.