“We know that our forefathers very generally kept the beginning of May as a great festival, and it is still regarded as the trysting time of witches – i.e. once of wise-women and fays; who can doubt that heathen sacrifices blazed on that day?” – Jacob Grimm ‘Teutonic Mythology’

The ultimate Walpurgis Night party was the one described in the book The Master & Margarita by Mikhail Bulgakov – complete with walls of flowers, champagne fountains, an ape jazz band and a guest list of naked, dead murderers.

I will be traversing the tundra in Sweden this Walpurgis Night, one of the few countries where it is still celebrated with fireworks and bonfire parties, hoping to visit the Vampire Lounge and the Tiki Room for some pagan cocktail magic. A flaming shot certainly counts as a form of bonfire and I like to be respectful of the old customs.

If you are at home, I have thoughtfully invented some Walpurgis cocktails based on the Bulgakov book, which if you haven’t read – lucky you! You have a wonderful treat ahead. Curl up with the novel and theme your drinks to the section you are currently reading. 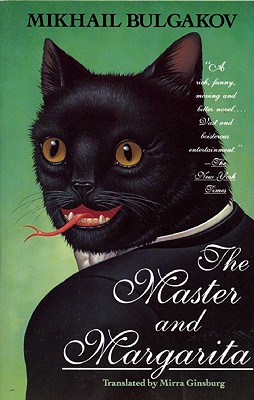 Light lots of candles for driving away evil spirits and if a urbane gentleman with mismatched eyes, a tall chap in pince-nez, a sexy redhead with a single fang or a gigantic black cat happen along and invite you to a party, do go. 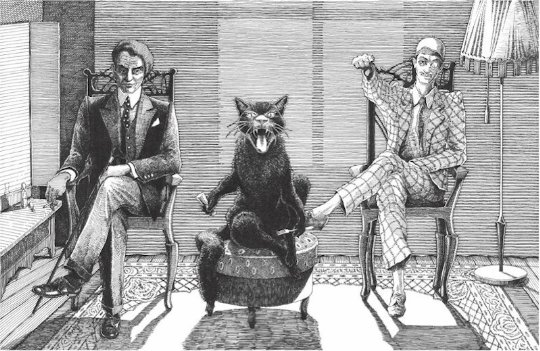 But bear in mind that “Well, but with sorcery, as everyone knows, once it starts, there’s no stopping it.”

The book opens on a scene in the city of Moscow, where two men are discussing poetry and religion whilst drinking warm apricot soda in the oppressive heat. It turns out that although you can even find gooseberry, bacon or sweet corn flavoured sodas these days, apricot is impossible to track down. So, we must improvise!

Calm Before The Storm

We can combine apricot with the vodka which is drunk throughout the book, often frosty with ice.

I took apricot pureé and used it to fill hollow ice cubes, then froze them again. I had hollow ice because I have that kind of ice machine, but you could also wait until your cubes are half frozen, tip out the unfrozen water, fill with puree and re-freeze. 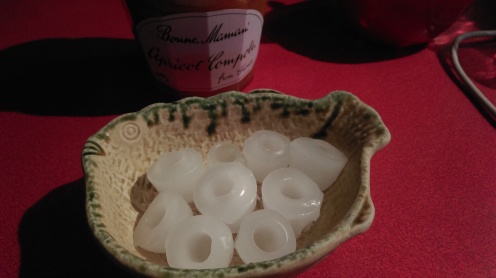 I made a little bowl of ice, just by putting water into a tiny bowl and placing a round glass bottle into it, then freezing. The glass is filled with apricot ice cubes, the bowl is nestled into the top of them, then filled with vodka. Fill the glass with soda water, and let the ingredients combine gradually as they melt – keep topping it up.

Hopefully it won’t make you hiccup, or introduce a blunt needle into your heart as a jeering phantasm weaves itself out of the air before you. 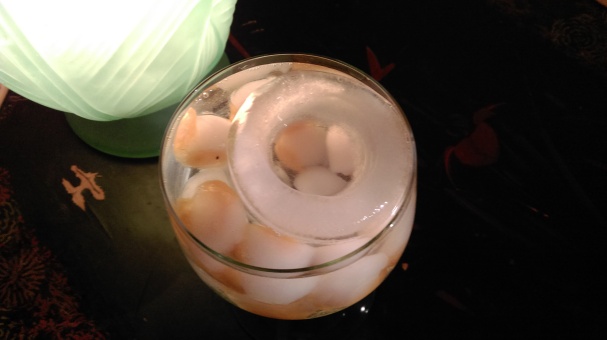 The next drink deals with the heroine of the book, so with a certain inevitability I chose a margarita. The Margarita of the book is a classic beauty, who anoints herself with a magic cream supplied by Azazello which turns her into a creature of the night and gives her the power of flight.

“Having laughed her fill, Margarita jumped out of her bathrobe with a single leap, dipped freely into the rich, light cream, and with vigorous strokes began rubbing it into the skin of her body.”

I made a classic margarita with tequila, Cointreau and lime, then for the flying cream beat together egg whites, absinthe, green sugar sand and cornflour until it transformed into meringue. 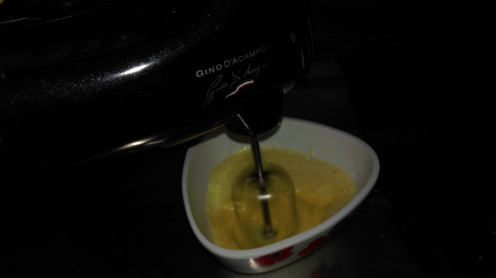 This made enough meringue for about 6 margaritas, so you could halve the amount if you were drinking alone (I said if). Place a couple of dollops of your green-tinged rich, light cream onto the drink, where it will float. 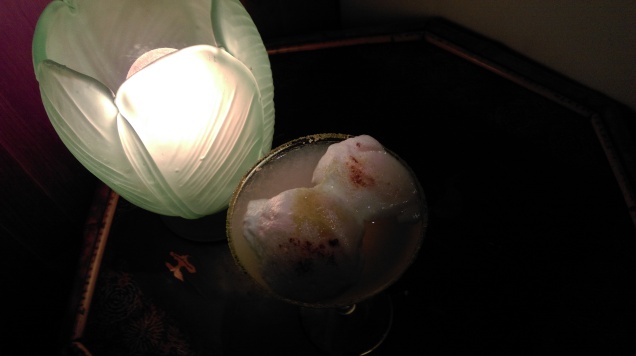 We use absinthe because it contains mugwort, which is the witches flying herb, also because lime, tequila and the aniseed flavour of absinthe work well together. I used a little blowtorch to brown the meringue for a delicate toasted flavour. The texture of the combination is very appealing, like an ice cream float.

A couple of these, and you may feel joy boiling up in you, in all of you, in every particle of your body, which will feel to you like bubbles pricking your body all over. You will be free, free of everything! 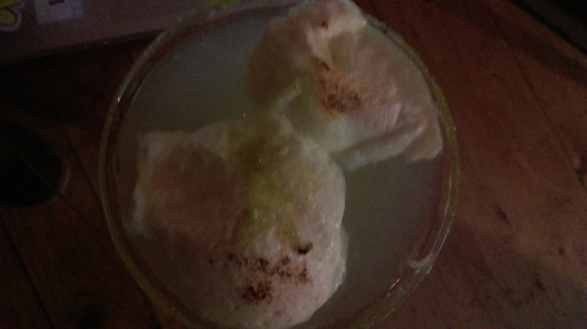 After that, you may feel a desire for something pickled and hot.

I made a snack selection based on some of the foods in the book, decorated it with likenesses of Behemoth the black cat, who always seems to be eating or drinking something, and provided blue-edged napkins like the handkerchief which haunted poor Frieda.

“Behemoth cut a slice of pineapple, salted it, peppered it, ate it, and then tossed off a second glass of alcohol so dashingly that everyone applauded.” 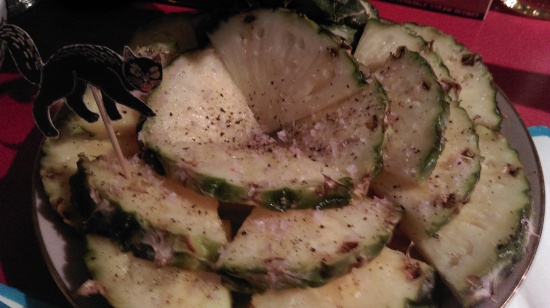 You may, however, not share the gigantic wise-cracking, pistol-happy feline’s taste for drinking out of a Primus stove for medico-comedic purposes…I do consider it my duty to tell you that the cat is an ancient and inviolable animal.

“’The only thing that can save a mortally wounded cat,’ said the cat, ‘is a swig of benzene.’ And taking advantage of the confusion, he bent to the round opening in the primus and had a good drink of benzene. The blood at once stopped flowing from under his left front leg. The cat jumped up, alive and cheerful, seized the primus under his paw, shot back onto the mantelpiece with it, and from there, shredding the wallpaper, climbed the wall and some two seconds later was high above the visitors and sitting on a metal curtain rod.”

To finish up, we have a drink which will take you to another place – the same wine the procurator of Judea drank. 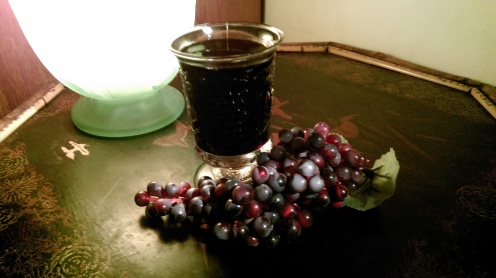 “All three put their glasses to their lips and took big gulps”.

Lace a short thick glass of red wine with a drop of blood cherry liqueur, although you can substitute any other rich sweet dark red liqueur. Swirl a few drops of bitters into it. Float a measure of 151 rum on the top – I used Goslings Black Seal. Set it alight, admire the fire, then blow it out and drink it down, as fast as you can.

This kind of rum can induce a kind of knockout drop amnesiac effect, so you should never under any circumstances drink more than one. Although….is that right? I forget.

“He quickly approached Margarita, offered her the cup and said imperiously: ’Drink!’ Margarita became dizzy, she swayed, but the cup was already at her lips, and voices, she could not make out whose, whispered in both her ears…”

Be nice to the people you run into tonight, or you may find yourself transformed into a hog-broomstick and be ridden all the way to the Brocken peak for a Witches Sabbath.

Thanks to Luke P for “The Master & Margarita” introduction.

Have a wonderful Walpurgis Night, or if you’re in my neighbourhood – Valborgsmässoafton. Skol!