If you thought that stuffing a chicken in a duck in a turkey after totally deboning them all like a sort of festive amateur surgeon to make a Turducken seemed like too much effort this year, or have been daunted by Delia Smith’s spaghetti sauce recipe with its four kinds of meat and three hour simmering time, then you should definitely steer clear of trying to make a Hand of Glory, because those things are an absolute faff to make.

Basically, it’s the dried pickled hand of a criminal who had been hanged, used as either a candle itself, or as a holder for a candle made from the fat of the corpse using their hair as a wick.

Going around the supermarkets at this time of year may be incredibly stressful, but getting these ingredients together would beat even a Black Friday queue outside IKEA.

The purpose of making the thing is to be able to use it to burgle people.

Lighting the Hand of Glory before you entered a building would ensure every lock opened for you, and that the occupants would fall into a deep slumber. Really, Hands of Glory are not as useful as they used to be, as they don’t have any power over CCTV recordings or DNA evidence.

Anticipate being called as a witness in my intellectual property lawsuit. I can promise you a lot of thrilling courtroom action and we’ll dress formally all in black and throw back our veils dramatically every time we have to give evidence- FUN!

Once you had your severed hand – after lurking around the gallows until midnight and fighting off other severed-hand seekers – you drained the blood from the hand, placed the fingers in the desired position, wrapped it in a cloth used previously to wrap a corpse and pickled it in saltpetre, long peppers, five kinds of urine, and salt.

Then it must be thoroughly dried and dipped in wax before being hung on a church door overnight.

They are fascinating objects though, if you enjoy gruesome things. An appropriate drink for New Years Eve is one which imitates the Hand of Glory with its five horrid flames, and is also capable of eventually inducing deep sleep as long as you categorize “passing out” as a type of sleep.

(A beholder gazing for the first time upon a bartender compounding this beverage, would naturally come to the conclusion that it was a beverage for Beelzebub rather than Bacchus)

The Hand of Glory

(You could vary this according to your taste)

Approximately 2 shots of Aztec Fire Rum to float – the rum you use needs to be overproof in order to give a nice big flame. Don’t bother trying to find the usual fallback overproof rum though- apparently Bacardi 151 has been quietly withdrawn from shelves. Why?- a mystery! You could try Goslings Black Seal.

Use 5 shot glasses and have long matches available.

Lay out your 5 shot glasses and half fill each one with a different fruit or flower liqueur.

Pour just enough rum over the back of a spoon to float on top.

Cut 5 large pieces of peel from your orange. Light each shot on fire, then after briefly warming each peel over each flame, squeeze it over the flaming shot.

When a slice of peel is squeezed over a drink above a flame, the resulting spray passes through the flame, is slightly caramelized and produces a sparkle effect.

Click here for the video of how to do that

Now, extinguish the flames – if this was an authentic Hand of Glory, you would need to use skimmed milk to achieve this, but as things stand, you can just blow them out – and drink quickly, one after another.

If there were five of you, you could use this as a basic bonding fire charm, or you can imbibe the Hand solo if you wish to produce powerful sensations of sensuality and euphoria, moving eventually into sweet forgetfulness.

This is not recommended if you are currently harbouring grudges or suffering from a broken heart, as rage and tears can be unfortunate side effects for those who approach the drink in the wrong spirit.

If you are in a dark place, these flames are not destined to illuminate your darkness. When you are unhappy or crossed in love, it’s always best to stick to Champagne, or white rum mixed with pineapple juice. These lift the mood and bring happy thoughts.

To the Dead Man’s knock?

Nor move, nor swerve,

At the spell of the Dead Man’s hand!

But be as the dead for the for the Dead Man’s sake!”

–  The Hand of Glory OR The Nurses Story – The Ingoldsby Legends 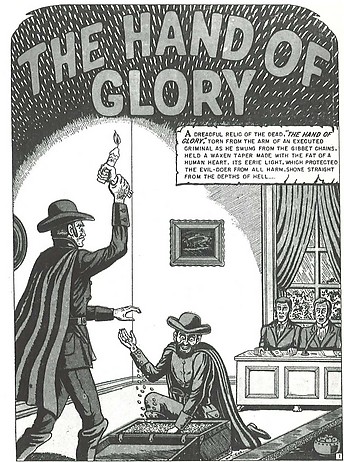 If you are in East London for any reason, you might enjoy a visit to The Hand of Glory pub in Amhurst Road, Hackney. The decor is definitively pagan, and the people almost suspiciously friendly. Their speciality? The Seven Deadly Gins, and the Hand of Glory Wiccan Fix (Greenalls Gin, Sipsmiths Sloe Gin, Lemon & Mint).