If you’re in South Africa, it will be the tokoloshe, but that’s another story for another time.  If you’re in Scandinavia this year, why then it’s the nisse and his companions the Yule goat and the Friendly Pig, bringing gifts and looking forward to his bowl of porridge.

Don’t forget to put butter on top of the porridge, that’s the way he likes it. And don’t go nibbling away at it thinking it’s like cookies for Santa. The nisse does not play, and may beat you savagely if you eat his food.

“Have you eaten the porridge for the nisse, you have to dance with him!”. 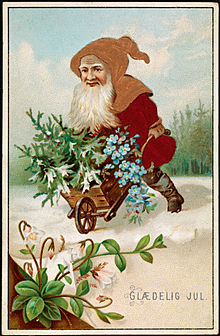 In other countries he’s known as a house-hob, brownie or kobold, and he mostly lives inside burial mounds. If you are looking for a nisse, go to a wood or forest, and search for a rise or small hill in the ground. Leave a gift of sweets or colourful food, and ask them respectfully to come and visit you at night.

If you are lucky, he may start to visit you, and help with the housework. Like all fairy-folk, they are notoriously touchy though, so be careful not to offend him.

If you anger him, his shape-shifting aspects may come into play, and he could reveal himself in his threatening persona as a tall monster with a single huge red eye rather than his everyday shape of a tiny bearded man with pointed ears, cats eyes, and three fingers on each hand.

Remember that he has a poisonous bite either way, and if you are ever bitten by a nisse, seek professional help immediately.

If you play your cards right he can be very protective and bring you good luck, so feed him correctly, treat him with respect, and your nisse will be your most valuable asset.

For his porridge food, the nisse will always appreciate a sweet and/or colourful topping – try sprinkling it with hundreds and thousands, cinnamon or coloured sugar.

A perfect offering would be a rum porridge pot cocktail- one for you, one for him. Like the Mexican horchata, this is a cinnamon flavoured oatmeal drink, punched up with rum. The nisse’s beloved sweet topping is provided by boba balls. Sweet cinnamon liqueur pulls it all together.

A few drops of red colour added to the drink, and white boba balls give it the appearance of the fly agaric mushroom, long considered the favoured seat of the nisse when in the wild.

Boba balls (You can get these at oriental supermarkets)

Soak the oats in 2 small cups of water for at least half an hour with the cinnamon stick. Blend together, then sieve to get a smooth mixture.

You can also buy pre-prepared oatmeal drinks from the supermarket, which you could flavour with powdered cinnamon.

Boil the boba balls for 20 minutes, until they are soft and chewy, then cool them.

Shake in a cold shaker with the rum and cinnamon liqueur, and pour into chilled glasses. Put them in the freezer for 15 minutes to achieve a firm texture. Decorate with the cooked boba balls. Keep a glass swizzle stick handy to stir the drink as you sip, to keep the oats from becoming sludgy at the bottom of the glass as the drink becomes more liquid.

Have one yourself, and leave one for the nisse in a corner of the room. 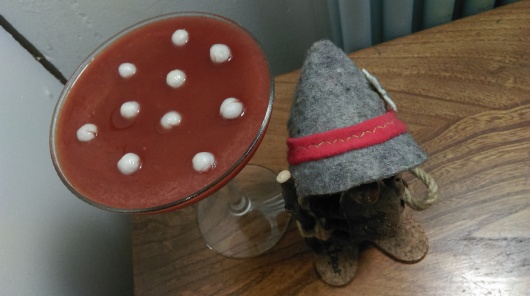