Since the Early Times, familiar creatures were accepted as quasi-supernatural entities who would assist witches and the Cunning Folk in their magical practices.

Documents of that era described them as appearing in numerous guises – usually as an animal, and most commonly as a cat, or cat-demon. Unlike ghosts or otherworldly spirits, they were described as having solid, furry form and appearance.

Attempts to categorize them as specifically malignant or benevolent in intent have always failed in the face of the inscrutable feline, even in their aspect as gods and goddesses in Ancient Egyptian culture.

There are many superstitions attached to cats, especially black cats – sometimes describing them as lucky, sometimes unlucky. They seem to have an especial facility to inspire projected thought. 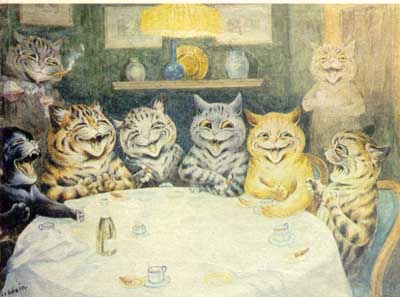 Victorian artist Louis Wain was best known for his anthropomorphized cat drawings and paintings, and when the schizophrenia which tormented him throughout his life finally caused him to be confined to a mental asylum where he continued with his work, the images of cats and kittens kept coming, but ever more fractal and disassociated, until they consisted of abstract, intricate patterns with only the merest suggestion of cats eyes peering out.

So entwined were his mental issues with his work, rumours were spread that he would speak only in mews, and lapped milk from a bowl.

Another cat-obsessed Victorian artist was the taxidermist Walter Potter, whose Kitten Wedding and Kitten Tea Party dioramas walk an extremely precarious path between whimsy and repulsion. Once seen, these cannot be unseen.

“Imagination is the only weapon in the war against reality.”
― Lewis Carroll

In this last century witches familiars have come back into vogue, especially in NeoPagan rituals, due to their association with older forms of magic. While wild animals can be magically coerced into co-operation, and spirit guides can be called up, the domestic cat has been the default choice for the last 100 years or so.

While social interaction with our fellow humans can sometimes be fraught with difficulty, pet animals are excellent drinking companions. They tend to be good listeners, and are great at keeping secrets. Also cats are completely amoral, so they won’t usually judge you. 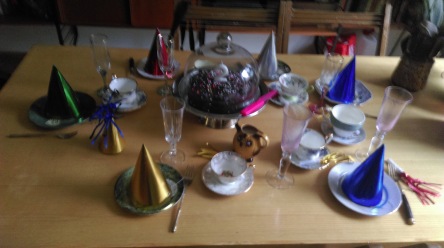 So, whether it’s just the two of you, or even if you invite a few guests, why not throw a party for your pet? On some level I’m sure they will appreciate the thought.

I like to keep things very traditional when having a feline fiesta, inspired by the cat party scene in the extraordinary 1977 film classic The Sentinel.

This epic flick includes Christopher Walken, Ava Gardner, Burgess Meredith and Jeff Goldblum in the cast, and has a final scene which must be seen to be believed. It’s directed by Michael Winner but try not to hold that against it, it can’t help it, poor thing.

I like to bake frou-frou cakes for my human guests – lots of edible gold spray, sprinkles and crystalized flowers – and provide small bowls of shrimps and tuna for my cat guests. Letting them suckle from the Devil’s nipple is optional at these events, for humans and beasts alike. Balloons and streamers provide atmosphere and double as fun playthings. 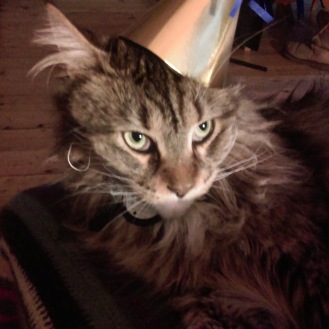 Tea-based cocktails are very en vogue at the moment – I have chosen for our party purposes a very middle class English concoction with gin and tea. My thanks to the good people at http://www.sipsmith.com/ for inspiring this.

Either infuse a bottle of gin with 4 tablespoons of Earl Grey tea, or use an Earl Grey teabag- overnight is ideal, but infuse 2 hours at the very minimum…

….alternatively, use something like this Earl Grey and lemon gin from Waitrose.

Serve in two chilled teacups, and if your familiar prefers you to drink both, don’t argue with it. It’s very important in life to learn to pick your fights. 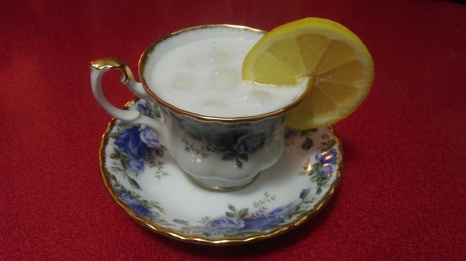 “Take some more tea,” the March Hare said to Alice, very earnestly.
“I’ve had nothing yet,” Alice replied in an offended tone, “so I can’t take more.”
“You mean you can’t take less,” said the Hatter: “it’s very easy to take more than nothing.”
“Nobody asked your opinion,” said Alice.”
― Lewis Carroll, Alice in Wonderland