At the Place Denfert-Rochereau in Paris, there is a small booth built of black-stained wood.

If you pass through its door, you can descend 130 steps down a narrow stone circular staircase, then follow low dank concrete tunnels until you arrive at your destination: The World’s Largest Grave.

This is fantastically popular as a tourist attraction, and during opening hours the queue stretches around the block. How this came to be a thing is an interesting story, I think.

The one they knew about was that they had a lot of cemeteries in the city, and they were overflowing. Literally overflowing. You didn’t want to live next door to a cemetery in those days, as it was quite possible that the walls of your cellar would collapse, and the space fill up with skeletons in various degrees of decay. Although the long-dead were exhumed and packed into “charnel galleries” inside the cemetery walls to make more space, it was obvious that something had to be done.

The other problem was that the city is mainly built from limestone, and not all of it had been ethically sourced. Unscrupulous limestone miners had been hollowing out tunnels and shafts under Paris for years, which would have been absolutely fine if all those big heavy limestone buildings hadn’t been on top of them.

Pits started opening in the city streets, occasionally engulfing houses, people and pets. And so Parisians became aware of problem no. 2.

After investigating the limestone honeycomb beneath the city, the Lieutenant-General of the police came up with a brilliant solution to both these problems. The excavated spaces were secured with concrete linings, and they began the job of gradually filling up this convenient new storage space with old bones. 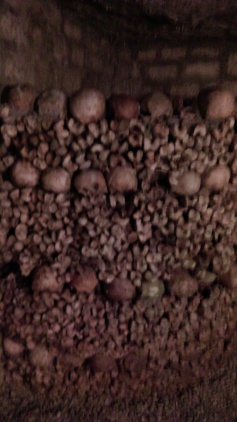 As there were large deposits of fat left after the skeletons were extracted, a small processing plant was set up at the site to thriftily convert this into candles and soap.

For the next two years, there was a nightly procession of black-draped funeral wagons between the cemeteries and the pits, accompanied by chanting priests swinging incense. At the beginning everything was jumbled and packed in together, until the head of the Paris Mine Inspection Service came up with the notion of creating a mausoleum with the remains. 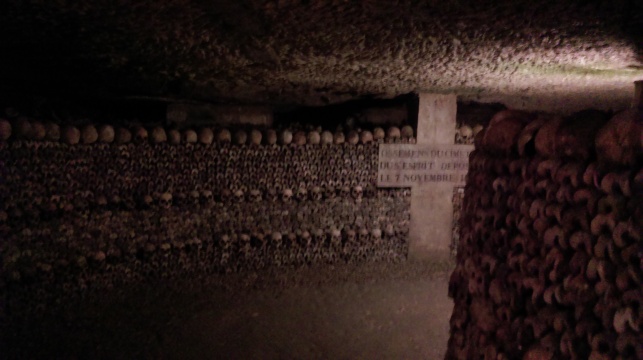 With admirable artistry, he oversaw the decorative stacking of skulls and femurs, installed various bits of funerary decoration sourced from the cemeteries, and had melodramatic plaques engraved with statements like: “Stop! This is the Empire of the Dead!” 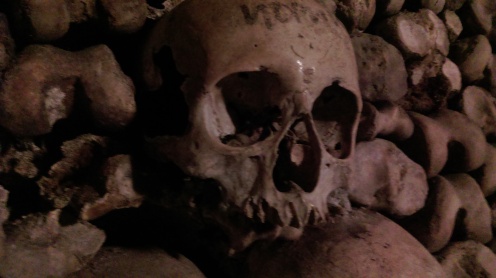 The resulting galleries were an instant popular hit with the public, and have seen a lot of action over the years. In 1788, violent rioting in the streets resulted in hundreds of unidentified bodies, which were quickly popped into the subterranean bone pits.

Since then, they have been used as hideouts by the French Resistance, the Nazis set up an underground bunker there, various secret concerts have been played over the years, the vast pools of water in the flooded lower depths have been used for illicit midnight swimming sessions, and in 2004 a fully equipped cinema was discovered in one of the more obscure rooms, complete with seating, a bar and a popcorn machine. 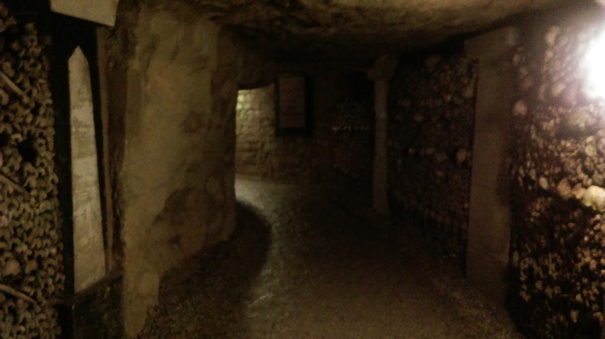 One of the more outlandish legends connected with the Catacombs is that of the Paris Worm, a gigantic eyeless albino serpent rumored to have grown to monstrous size in the lowest chambers of the mines.

It’s a fascinating thing to do of an afternoon – to wander the bone-lined corridors and casually contemplate mortality. After you emerge blinking into the sunlight (assuming the Worm hasn’t claimed you as a victim), you can buy some skull-themed souvenirs at the gift shop and pop into a café to perform the Absinthe Ritual.

The classic ritual is to pour a measure of absinthe into a glass, place a perforated spoon across the top of the glass, put a sugar cube onto the spoon and slowly drip iced water onto it, watching the absinthe cloud and turn pearly white as the water blends with it. Then slow sips are the order of the day, until the drink is finished and you are ready to go again.

I favor the flaming version of the ritual, whereby you balance the sugar on the spoon over a glass of water, then drip absinthe through the sugar until it is saturated, the green spirit gradually mixing with the water below.

Set the cube on fire, and watch it burn and drip as caramelized glop into the mixture, re-saturating and relighting it as time goes on. 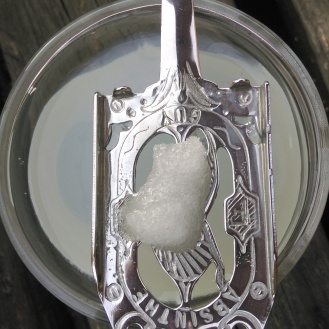 A version known as the Bohemian Ritual requires you to pour absinthe into a glass, then dip a teaspoon of sugar into it. Take it straight out, and set light to it- and when it liquefies, plunge it into the glass, usually lighting the whole drink on fire, whereupon you pour in iced water to douse it, then drink.

This became popular after it was shown in the film Moulin Rouge, but no serious absinthe drinker would contemplate it and probably consider that they should rename that film Foolin Rouge.

I must admit that it sounds pretty disrespectful to the Green Fairy, so I’ll stick with my flaming cube option or the cold drip. You should certainly allow an entire afternoon to do full justice to the ritual.

If you’re not an absinthe fan, and you are looking for a drink with a catacombs type feel, you could try Dan Aykroyd’s Crystal Skull Vodka. When I was a teenager, the favoured chick drink was vodka and lime, basically vodka with Roses Lime Juice.

I’ve made a summer version of that here by replacing the lime with cucumber syrup, which is pretty yummy.

Whichever option you go for, sip rather than gulp. I’d hate you to get out of your skull. 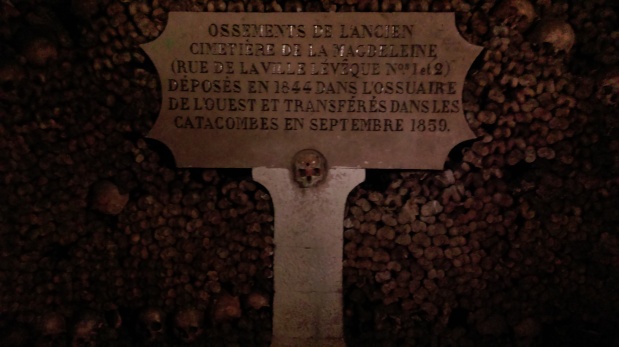